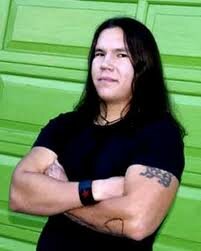 with Rosanna Deerchild and Duncan Mercredi

Midnight Sweatlodge tells the tale of family members, friends and strangers who gather together to partake in this ancient healing ceremony. Each person seeks traditional wisdom and insight to overcome pain and hardship, and the characters give us glimpses into their lives that are both tearful and true. Rice captures the raw emotion and unique challenges of modern Aboriginal life. It’s a hard-hitting and genuine look at the struggles First Nations people face.

Waubgeshig Rice is a broadcast journalist and writer who lives in Ottawa. He grew up in Wasauksing, an Anishinaabe community on the shores of Georgian Bay. His articles, essays and columns have been published in national newspapers and magazines, and as a television journalist he has filed reports from across Canada. Midnight Sweatlodge is his first published work of fiction.

Rosanna Deerchild is Cree from South Indian Lake, Manitoba. Her poetry has appeared in a number of literary magazines including Prairie Fire and CV2. She is the co-founder and remains a member of the Aboriginal Writers Collective, established in 1999. Rosanna currently works a broadcaster with the CBC. This is a small northern town, Deerchild’s long-awaited full-length collection of poems, won the 2009 Aqua Books Lansdowne Prize for Poetry.

Duncan Mercredi is a Cree/Metis writer/storyteller, originally from Misipawistik (Grand Rapids, MB). In addition to his four books of poetry, he has had his work featured in three anthologies of Native writings and in other periodicals such as Prairie Fire and CV2. He is a winner of the Ross Charles Award, and is a long-time member of Manitoba’s Aboriginal Writers Collective. He also hosts Friday Midnight Blues on NCI radio.

The virtual elves work tirelessly in the website boiler room to keep all of its innards working smoothly and happily, and to ensure that fresh new items continue appear to amaze and amuse members and followers of The Writers' Collective of Manitoba.